From one form of exercise, how many benefits can you really reap?

In today’s society, many people think of themselves as ‘time poor’ and want a product or service that will provide the maximum benefit without the added time. Yoga is one of those. Yoga is an evidence-based meditative exercise, involving relaxation, concentration, a focus on breath as well as gradual and purposeful movement.

There is an increasing amount of research showing the physical benefits of practising yoga and, with the amount of images circulating on social media showing toned, strong individuals, it’s hard to disagree. By attending a minimum of two yoga classes a week for a total of eight weeks, an individual’s muscular strength increases by as much as 31 percent, their muscular endurance by 57 percent, their flexibility and joint range of motion by as much as 188 percent and maximal oxygen uptake (VO₂ max) by 7 percent (Tran et al. 2001).

Results from the above physical benefits lead to better posture, reduced muscle aches and pains, protection for your spine, stronger bones, increased blood flow and circulation and improved balance.

But what are some other benefits of yoga?

It regulates your adrenal glands.

The adrenal glands produce and release cortisol, which, at short intervals, boosts the immune system. However, prolonged release of cortisol can compromise your immune system, decline your long-term memory, increase symptoms of depression, increase osteoporosis, increase blood pressure and increase your appetite and insulin resistance… Not good!

Studies have shown that yogic practices inhibit activity in the hypothalamus to, in turn, affect the anterior pituitary gland to produce less adrenocorticotropic hormone (ACTH). This then decreases the amount of cortisol produced in the adrenal glands, optimizing the body’s response to stressful stimuli and restoring balance within the body’s reflex mechanisms (Arora and Bhattacharjee, 2008).

It decreases your blood sugar levels.

Several studies have shown that, from practising yoga for as little as 8 days, there are changes in a type 2 diabetic’s symptoms. Changes include a decreased blood glucose, an improvement in the glucose tolerance test, a decrease in fasting insulin levels and a rise in insulin receptors, thus improving sensitivity to insulin (Mahajan, 2014). Diabetics who practise yoga have also shown to have decreased the amount of medication they are taking (Mahajan, 2014). These results are all very promising, showing yoga to be a cost effective method to improve type 2 diabetic symptoms.

It helps to regulate your hormones.

Let’s try to keep it simple as this can get complicated quickly – see Figure 1! 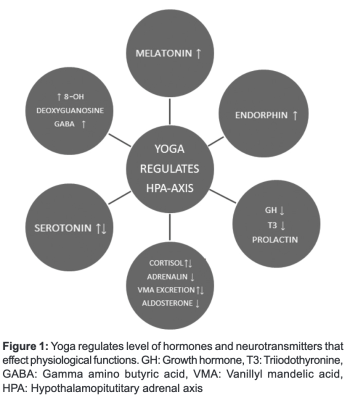 Additionally, increases in GABA, a neurotransmitter in the brain, is seen following a 60 minute yoga session, leading to decreased levels of stress, improved mood and an overall calming effect (Mahajan, 2014). These are just a few of the many changes to one’s hormonal balance, achieved through practising yoga.

It boosts self esteem.

The yoga philosophy and teachings consider the spiritual parts of life, encompassing more empathy, gratitude and forgiveness towards yourself and others. Individuals with a normal body mass index and who practised yoga were shown to have more positive self talk and were less likely to be dissatisfied with their body weight and shape than non-yoga users (Lauche et al., 2017). Additionally, those who practised yoga were more likely to exercise regularly and follow a low glycemic diet, which generally leads to a more healthy, balanced lifestyle (Lauche et al., 2017).

It builds awareness around your own transformation through life.

Through the physical practice of yoga, you become more aware of what and where your body is in space. This translates to your internal awareness; you may find it becomes easier to be aware of negative emotions and free yourself from them, realising they are not a part of you and that you do have control over how you feel.

Yoga will show you that transformation isn’t a straight linear line, that sometimes you fall, that there are distractions and backwards steps to get to your goals and that this is normal and everyone goes through them. Just look around a yoga class, everyone will fall at least once!

These are just a few of the many gifts of yoga, which have kept many hooked on yoga for life. Try YouTubing ‘Tao Porchon-Lynch yoga’ and prepare to be inspired and motivated to start practising today!